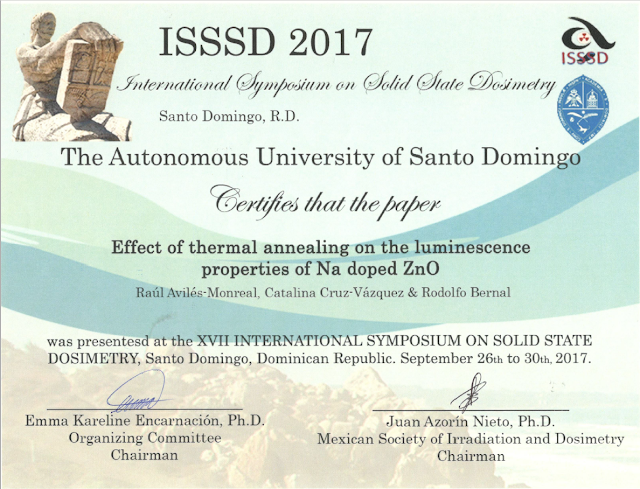 ZnO is multifunctional material with potential application, for example, in ultraviolet light emitting diodes, laser diodes, sensors, varistors, and solar cells. The band gap modification in semiconducting materials by doping or thermal annealing [1,2] , remarkably influence their properties, including the thermoluminescence (TL) response. In particular, Na doping modifies the optical properties including the band gap energy and the luminescence features [1,3] . Despite this, no reports on the TL properties of ZnO:Na concerning their dosimetric capabilities are found in literature. In this work we report a study concerning the effect of different thermal annealing treatments on the TL features of Na doped ZnO phosphors. The characterized samples were synthesized by a chemical precipitation method and then sintered at 900 °C for 24, 48 or 72 h. The best reusability into successive irradiation-TL readout cycles were observed for the samples annealed at 900 °C for 48 h. The characteristic glow curves of those samples show three maxima located at ~ 135 °C, ~ |235 °C and ~ 295 °C after exposure to beta particle irradiation in the dose range from 0.5 to 1,024 Gy. The integrated TL increases by increasing the irradiation dose with no saturation clouds, with linear response segmented in two regions over the whole dose range studied. The TL glow curve of ZnO:Na phosphors sintered at 900 °C for 48 h was deconvoluted using the TLAnal computer program. From the experimental results here reported, we conclude that the synthesized ZnO:Na phosphors are promising to develop new high performance TL dosimeters and suitable thermal annealing procedures can be used to improve the TL properties.
Publicado por Dr. Rodolfo Bernal en 10:49